TURN YOUR CAR INTO A GAS EFFICIENT HYBRID.

DRIVE AN AVERAGE 145 MORE MILES ON A TANK OF GAS.

EASY TO INSTALL, EASIER TO SCREW UP

ALL FOR ONLY FIVE EASY MONTHLY PAYMENTS OF $29.99.

The People's Machine Factory #52 (see GSR  April 6, 2013 for more on this Chinese industrial juggernaut) of Huang Hey Province is pleased to announce that its first shipment of Easy Gas Hybrid Car Converter Kits is now for sale in the United States of America! The kits are available for most model cars including Ford, GM, Chrysler, BMW and Dodge. Once Japan agrees to the People's Republic of China's claim that Kibashi Island in the South China Sea is a Chinese protectorate, kits will  be made available for Nissan, Honda, Toyota and Subaru.

Are you pumping gas more than you're pumping your friends for money? Do you keep looking under your car to see if the gas tank is leaking? Does taking the bus to work seem to be a more viable option? Are you getting tired of looking at all those Prius owners with their smug, phony smiles, little rat-ass dogs and L. L. Bean distressed tofu flip flops?

Something like this hasn't made it here over from China since the first Relco 30 quart deluxe turkey fryer. True, one of the early models was described by the Nuclear Regulatory Commission as more dangerous than a runaway nuclear meltdown but those fryers were quickly recalled and every affected family was safely relocated.

But you don't have to worry about that. The People's Machine Factory #52 has been making and supplying over 98% of all the world's balloons without a single industrial accident of biblical proportion in over seven years. We've even managed to increase our worker burn-out replacement time from an average 42 minutes to a whopping 49 minutes! Further, every one of our workers has received at least 16 minutes of retraining once we converted our 2,600,000 square foot factory (special thanks to the 1.2 million displaced peasants) from balloon production to our newest attempt to become super rich, our Easy Gas Hybrid Converter Kits. Fat chance of finding any balloons next year for your grandmother's 75th birthday.


Our Easy Gas Hybrid Car Converter Kit is the simplest and most economical way to convert your gas guzzling, exhaust polluting, incredibly loud sounding, 1970's transportation debacle into a tool for the millennium to come. Particularly so once the People's Republic of China owns you, your house, the company you work for and every other American asset east and west of the Mississippi. Our kits are easy to install and come with our complete step-by-step instructions in Mandarin, Cantonese and just about passable English. Coming soon in Norwegian! If you've ever put together a Large Hadron Collider in a single afternoon, this should be a piece of cake.

With the Easy Gas Hybrid Car Kit there's no drilling involved. In fact, there's no screwing, cuckoldry, copulation, coitus, cuddling, intercourse, fondling, foreplay or sexual congress needed at all! Everything is included in your kit. You even get a heavy-duty tourniquet for when you invariably slice off a couple of fingers trying to install our under the hood stainless steel watchamacallit.

You may ask yourself, "Ta shi ruhe gonzuo de?" The Easy Gas Hybrid Car Kit works by taking advantage of the great Ming dynasty philosopher and physicist, Li Ziyang's third law of physics: for every action there is an equal and opposite reaction. Although it is forbidden by ancient Chinese custom to show an illustration of our product before you purchase one, be assured that when the People's Machine Factory #52 makes a product, we stand behind that product 100%! When's the best time to call customer service? Any third Thursday of the month around 4:00 AM as soon as you become fluent in Chinese.


Remember, whether you drive two hours each way to work or just down the block to your local 7-Eleven to pick up your favorite Hot Pockets, once you're driving with your Easy Gas Hybrid Car Kit installed, you'll hardly need a gas station again. Unless, of course, you're like our friend Ruby Begonia who just can't hold her beer.

Mount Olympus announced today that Zeus, 8,347, will be directly participating in the round table discussions between the Greek government and the 17 members of the European Union in an effort to reach an agreement over Greece's economic situation.

In an exclusive interview, Esther Lester, GSR's Other Worldly Correspondent levitated with the Olympian deity Apollo to ask his opinion of the new Greek initiative. Mr. Apollo, whose resume includes god of music, art, poetry, plague, healing, manly beauty and archery began with the usual boilerplate Mount Olympus disclaimer: "First, let me say that the opinions I will express here today are solely mine and do not represent the opinion of any other gods and goddesses, mythological three headed beasts, one-eyed man-eating giants or that loud mouth Achilles. Ever since Brad Pitt played him in that movie Troy, he hasn't shut up. Although Angelina is one mortal I wouldn't mind taking to one of Dionysus's toga parties."

"Truly, do they think we have no purpose or influence over mere mortals anymore? Do they think Mount Olympus is some retirement village for those over 400 feet tall? Some place where outdated, out of touch immortals play shuffleboard all day and sit around talking about their inflamed gums? Look at global warming. Do they really think that global warming came from a bunch of weak, petty mortals, present company excluded, with their coal fired fuel plants and their gas guzzling VW Rabbits? Let me tell you. It's getting hot down below because we like it that way. And in a couple of hundred years, if we so choose, we'll cool it down again. Variety is the spice of immortal life, wouldn't you say?"

Zeus, king of all the gods, is last known to have made the trip to terra firma in 1978 when he was asked to mediate a dispute between of George's Diner and the Parkway Diner when Anna Lakteris, a waitress at George's, fell in love with a waiter at the Parkway, quit her job and began working there. Harsh words were uttered after Frank Petrogalis, co-owner of the Parkway with his brother-in-law Mikos refused to send Anna back to George's Diner. The incident soon became an epic battle of mythological proportions when George, owner of George's, marched his entire staff over to the Parkway during the Friday night dinner hour, sat them down at the counter and ordered 37 split pea soups, moussakas, and small Greek salads to go. Then first blood was spilled when rumor spread that the Parkway used farm raised anchovies in all their salads.


It was now a war of attrition, suspicion, sedition and bad nutrition. Clearly if something wasn't done New Jersey would be headed back to the Dark Ages of Philly cheese steaks and lobster thermidor. Was George's Famous Diner (distantly related to but not on speaking terms with) on Neptune Avenue in Brooklyn next? Would this be the end of those small little paper cups of coleslaw on the side? Would Western civilization never again be offered four day old butter cookies as they paid their bill?

The innocent people of northern New Jersey began to suffer while those on Mount Olympus found that takeout delivery times were becoming outrageous. They all called on Zeus and his mighty wisdom.

This isn't the Iliad I'm writing here, so let's just say this. Zeus makes his appearance, throws down a few lightning bolts, turns a few prep cooks into frogs, badda bing, badda boom, he makes the peace. Anna goes back to George's and gets herself a nice little summer house on Long Beach Island and the Parkway Dinner gets sole control over the souvlaki cartel for all of northern New Jersey down to and including exit 8 of the Turnpike for the next 236 years. End of story.

Preparations are now underway to accommodate Great Zeus and his expected entourage of gods and goddesses, nymphs (lots of nymphs), one-eyed human-eating giants and pet Minotaur. The top two floors of the King Midas hotel, two miles of air space above, and all the earth below the hotel down to Hades have been reserved. Complimentary river rides on the River Styx for all representatives of the European Union are being planned. Sources tell GSR that a chair large enough to sit Zeus will be delivered Saturday from Ikea although the estimated time to put the chair together is 286 years. 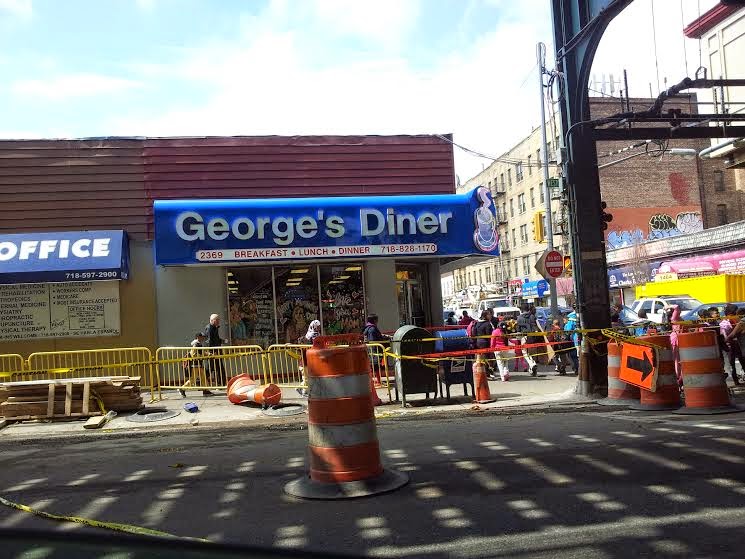