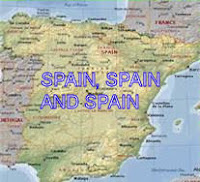 In an effort to promote Spain’s highly established position in international law, finance, commerce and small food portions, Spain’s parliament has voted overwhelmingly to rename their country, Spain, Spain and Spain. Seeking to establish brand recognition on the international stage is every country's goal  and the new name is expected to put Spain, Spain and Spain on the map.


Not since the end of World War I has a major European country changed its name. In 1918, Famished became Hungary and Deluxembourg was changed to Luxembourg once it stopped offering lettuce, tomato and a slice of pickle on the side. In 1932, Cthiopia changed its name to Ethiopia after it was discovered that Dthiopia was already taken.
Spain, Spain and Spain’s Prime Minister had this to say. “We are very excited to present our new name to the world. But, to those skeptics I say, if Columbus had three ships, why can’t we have three names? The 3 Stooges, 3-4-5 right triangle, 3 ring notebooks: legal precedent has been set."

Skeptics were doubtful, doubters were skeptical. GSR's Manuel Ryman spoke to one such individual, Zorro, a professor in the Department of Long, Thin, Pointy Swords at the University of Sangria. "Yes, Columbus may have had three ships but only the Nina offered free style dining," he said.
In other news, the Ministry of Milking Bad Ideas (Ministerio de 2% Milko Bad Ideas) will be holding open hearings the beginning of next year to change the name Madrid to Finkelstein, Schechtman and Klein.
at 9:23 AM