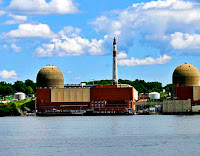 In a joint conference of the Nuclear Energy Commission (NRC) and the Governor's office, plans were announced today to move the entire Indian Point nuclear power facility out of Buchanan, New York to a new location 60 miles south on the shores of the Hudson River in Tarrytown, New York.


Further details are forth coming. However, an anonymous spokesperson in the Governor's office said that the impetus for the move was the New York Academy's 2013 "Report on the Energy Future of New York State." In it, the report makes clear that by 2030 New York State could be 90% free from fossil fuel dependency and "on-line" with alternative fuel sources of energy so long as "all those anti-nuclear knuckleheads get out of New York and go back to where they belong."


Later, in an interview with GSRadio, the commissioner outlined the reasons for the move. "First," he said, "to build the new Tappan Zee Bridge will require lots of energy. That energy has to come from somewhere and what better place than Indian Point? However, as you know, the amount of energy lost over transmission lines is tremendous and we thought it would be a better idea to simply move the plant closer to the site of the bridge. Also, after careful consideration, it was decided that the best way to remove the old bridge would be through controlled but sustained nuclear detonations. To carry this fissionable material down the highway from Buchanan to Tarrytown would be a potentially dangerous situation what with all those pimply skate boarder and really old people crossing those streets with their walkers. Also, the NRC is just getting sick and tired of all those grass roots anti-nuclear groups hanging around Indian Point, complaining about a little radiation, carrying their multi -use canvass shopping bags and kayaking up and down the river for no apparent reason. Maybe those a***** can stop some rinkey dink oil company from fracking on farmer Brownes farm, but this is the NRC and we don't take hostages. Finally, and this came right from the White House, moving the nuclear plant to Tarrytown will make all those local grass root organizations have to change all their stationery. Then let's see how effective they are. Is this thing still on? Good. In these situations I always remember what my grandmother used to say. Hey, you rip a deez pants, you mend a deez pants.That's it. I've said my piece. Or is it peace? Who nose? Time to go. And take that genetically modified salmon with you."

Later that day, GS Radio's James Boswell caught up with acting town supervisor, I. Herodotus and asked him about the possible future plans of the soon to be empty Indian Point land. He said," It's all about the lost tax base. Whenever anyone finds themselves with a Superfund site they think parkland. Thing is, I've never seen a squirrel pay his taxes. We're thinking one big 32 acre Taco Bell. Open 24/7, landing strip, heliport, underwater submarine dock. That should keep little Jimmy from losing his house because the fire department was cut back to one old guy with a bucket of water.


In an effort to allow fair and equal time, GSRadio asked Samuel Pepys, the over all coordinator of the Hudson River Valley Anti-Nuclear Movement and Organizations to Bring Back Seeded Watermelon (HRVANMOBBSW) for his comment on the move to Tarrytown.


"Sounds pretty good to me," he said.